Appendix Surgery or Appendectomy involves the removal of appendix after the occurrence of appendicitis. Let’s find out about when you need an appendix surgery, what the procedure involves, and where to get best surgeons for appendectomy.

Why do People Get an Appendix Surgery?

First, the surgeon will administer the patient with certain antibiotics to prevent the overgrowth of bacteria. The dose of antibiotics will depend upon the degree of the damage. In the case of sepsis, the patient would have a single dose of injectable antibiotic. If the appendix has ruptured already, the surgery will start without administering the antibiotics.

The patient will undergo general anesthesia before the surgery. For the surgery, there are two common methods; open surgery and laparoscopic surgery.

Open Surgery for the Appendix Removal

Laparoscopy is the recent trend in surgical procedures, which involves cutting certain a part of an organ or removing if entirely. This process involves making three small incisions (of ¼ or ½ inches) to expose and remove the appendix instead of opening a larger portion of the stomach or lower abdomen. This surgery also uses a small camera or laparoscope, which is a mini tv-like monitor to show the appendix and the surgery procedure in an enlarged view. To remove the appendix laparoscopically, our surgeons have special instruments that can easily perform the surgery without any deep incisions.

Are you having problems with your appendix? Call us at 212-988-1136 to book an appointment. We have NYC’s best surgeons for laparoscopic appendix surgery. For more information visit our main website.

The procedure of surgically removing the narrow, elongated tube attached to the colon-known as an appendix when it becomes diseased, inflamed or infected (appendicitis) is called appendectomy. It is normally carried out on an emergency basis as swollen appendicitis could burst if not excised, causing the clogged stool and bacteria to spread. It would eventually infect other gastrointestinal organs and lead to peritonitis-a life-threatening condition. A ruptured appendix could also create an abdominal abscess which is also a grave condition that could endanger your life.

Generally, two kinds of appendectomy are carried out to do away with appendicitis: 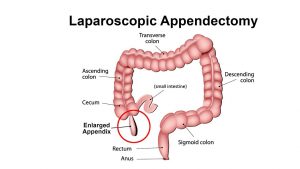 Open appendectomy is more suitable for patients whose appendices have split open and also for those who have undergone abdominal surgery before.

A laparoscopic appendectomy, on the other hand, involves accessing the appendix via three tiny incisions or openings made in the lower abdomen. A cannula filled with carbon dioxide (a slender and small tube) is inserted through the openings for inflating the abdomen following which a laparoscope is slotted in.

A high-resolution camera fixed at the head of the laparoscope transmits the image to a display screen. The displayed images will clearly show the precise location of the appendix which in turn will help the surgeon to channelize the surgical instruments for ligation (of the appendix) and excising it. Keyhole surgery usually resorts if the patient happens to be overweight and aged.

The specific benefits of laparoscopic appendectomy vary from one patient to another, depending upon his or her condition. Nevertheless, the common benefits entail:

The associated risk factors or complications are more or less the same for both laparoscopic appendectomy and open appendectomy. Following are some common side effects: 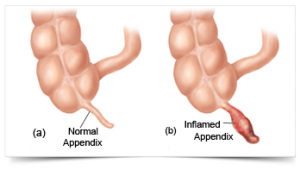 Once you’re through with the surgery, you’ll need to abide by the surgeon’s instructions to stay safe and secure. Your surgeon will generally list the following instructions and precautions:

Most patients convalesce from appendicitis within 4-5 weeks of the conduction of laparoscopic appendectomy. Nevertheless, a very slim chance of getting infected is always present.

Laparoscopic appendectomy is generally resorted to when there is imminent risk of the inflamed appendix bursting open. The risks related to leaving appendicitis untreated are remarkably grave and could endanger the affected individual’s life. For complete information on laparoscopic appendix surgery of the appendix, you can contact our general surgeon and make an appointment with him for possible surgery.